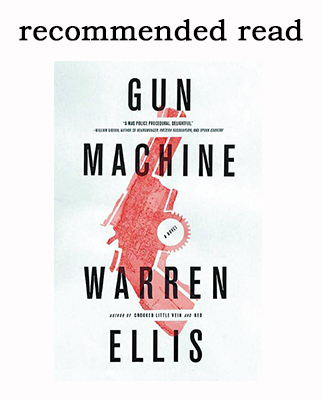 Warren Ellis brings his visual storytelling skills honed from his comic and graphic novel work, his obsessions with present and future technology, and his flair for fast paced dialog to a novel that is part modern police procedural, part CSI drama, part serial killer monologue, and part techno thriller. What starts out as a really bad day for Detective John Tallow, as he sees his partner shot dead in front of him, suddenly becomes a potentially career ending day with his discovery of an apartment full of guns that lead back to a host of unsolved murders. The plot moves forward at a relentless pace. Ellis gets you inside the heads of all the characters, including the psychotic serial killer who has composed the room full of weapons. I think it should appeal to those readers who like their cops a little damaged and self-destructive as well as those who liked  The Girl With the Dragon Tattoo. I hope that Ellis continues to explore this fascinating cast of characters in future books. ~Scott